Esther has funded healthcare for 17 patients in 7 countries. 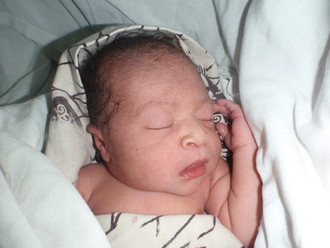 Joseph was born in Tanzania just four days ago! Joseph's family works as small-scale farmers, selling maize and beans. Joseph’s mother also sells bananas at the local open market for supplemental income. Joseph was born with myelomeningocele, a type of spina bifida, as well as hydrocephalus, which involves cerebrospinal fluid buildup within the brain. Myelomeningocele is a defect in which a part of the spinal cord protrudes out of the body through an opening in the back. Thus, Joseph is currently living with a lesion on his lower back that is continuously leaking cerebrospinal fluids into various part of his body, including his brain. If left untreated, this leakage can lead to infection, muscle weakness, or paralysis. If the fluid reaches the brain, it can eventually cause blindness, seizures, or brain damage. Often times myelomeningocele can also result in a loss of sensation, particularly in the feet or legs, because the nerves in the spinal column fail to function properly. For only $1,100, doctors will be able to move Joseph’s exposed spinal cord back inside of his body and cover it with muscle and skin. This procedure will prevent the cerebrospinal fluid leakage, reduce Joseph’s risk of infection or any further complications, and allow him to live a healthy newborn life. Joseph’s mother was scared when she became aware of Joseph’s condition. Her family’s small agricultural business does not make enough money to pay for a spina bifida treatment and her third child, born only a year earlier, had the same condition as Joseph and passed away after birth. “I just pray that my son will survive and grow like the rest of my children,” says Joseph’s mother. 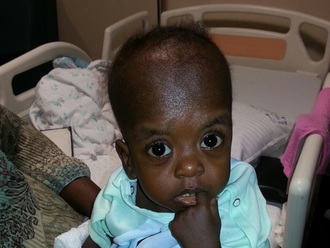 This is Rebecca, a one-year-old girl from Haiti! Rebecca is her father and mother’s first child, and her parents are both vendors at their local market. “Rebecca was born with a cardiac condition called ventricular septal defect,” our medical partner Haiti Cardiac Alliance (HCA) tells us. “A large hole exists between the two lower chambers (ventricles) of her heart. As a result, blood flows through this hole and back to her body without first passing through the lungs to obtain oxygen. This leaves her very weak and sickly, and would be fatal if not treated.” “She has been very sickly since birth, and has spent much of her life so far in and out of the hospital for cardiac complications and malnutrition related to her heart problem,” HCA continues. “It has been such a struggle to get Rebecca to feed and gain weight ever since she was born,” Rebecca’s mother tells us. “I hope that after her surgery she will get an appetite and start to grow!” For $1,500, we can support Rebecca by funding the overseas prep and transportation she needs to get to a hospital that can provide her surgery. The surgery will close the hole in Rebecca’s heart and hopefully enable her to lead a normal life. 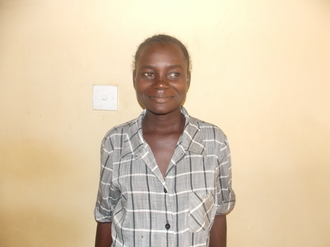 “Josinter is known in her village as a social lady who happily interacts with everybody in the community,” shares our medical partner in Kenya, Lwala Community Alliance (LCA). “Josinter is married to a farmer and they have three children who are all in primary school.” Josinter is currently pregnant with the family’s fourth child, and is experiencing headaches and mild abdominal pain. As a result, she’s unable to help on her family’s farm or attend to her household duties. “Josinter hopes for a healthy and jovial child and for a quick recovery after delivery so that she can join her husband on the farm,” shares LCA. $290 will provide Josinter and her baby with prenatal, delivery, and postnatal care.

Say hello to Khon! He is a 76-year-old from Cambodia, who has eight children and 20 grandchildren. Khon was diagnosed with mature cataracts in both of his eyes, meaning that the natural lenses inside his eyes have become clouded. “His vision has been blurred for a year. This makes it hard for him to carry out daily tasks, and he cannot care for his family and home as he used to,” shares our medical partner, Children’s Surgical Centre. Because of this condition, one of Khon’s daughters often looks after him, causing her to miss work and caring for her children. All Khon wants is his independence back, and for $150, we can provide that. “I traveled six hours from my village in the hopes that my vision can be improved,” says Khon. Let’s work together to make sure he gets what he needs! 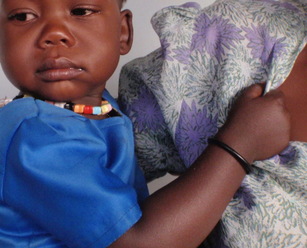 Meet Cecilia, a playful one-year-old girl from Tanzania. The third born in her family of five, Cecilia loves to play with toys and is never too far from her mother’s side. Cecilia’s parents work very hard to support their family. “Her mother is a self-employed cook, preparing morning bites and afternoon meals for staff working at a local dispensary in their village,” shares our medical partner, African Mission Healthcare Foundation. Cecilia’s farther works as a guard at the same dispensary. Cecilia has started to walk but she is using the lateral aspect of her left foot to support herself, a condition known as unilateral club foot, and is experiencing pain as a result. While her parents are able to provide for their families living expenses, they are unable to afford the medical care Cecilia needs in order to treat this condition. Cecilia’s doctors tell us, “If not treated, Cecilia is at high risk of developing early osteoarthritis of the small bones of the foot.” $1,160 will cover the entire treatment plan for Cecilia, including x-rays, casts, club foot surgery and recovery! With this treatment, she will be able to walk properly for the rest of her life. “We hope that defect can be corrected to allow her to walk properly and later on be able to go school and grow up like other children,” said Cecilia’s mother. Together we can give Cecilia access to the care she needs! 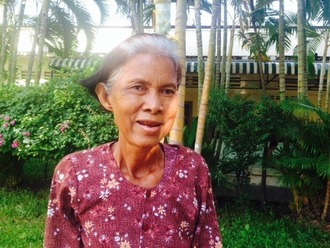 Meet Soek, a 67-year-old field worker from Cambodia. Soek is the mother of one and the grandmother of four. She loves coming out of the field and sitting next to a radio, listening to the news an old Khmer songs. About a month ago, Soek fell down some stairs and fractured her left hip. Our medical partner, Children's Surgical Centre, shares that Soek's injury "makes it extremely difficult for her to walk and sit down. Now Soek must lie down to rest and cannot hear the radio from her bed." Because Soek cannot afford a proper hip replacement, "she and her sister made an arduous three hour journey from their province seeking care." For $430 we can fund Soek’s hip replacement surgery. The procedure will allow Soek to walk and sit without pain. Let's help Soek get out of bed and back to listening to the radio she loves! 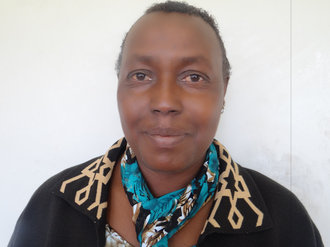 Pauline is a 43-year-old woman who lives in Kenya with her husband and four children. Pauline and her husband are farmers - this is how they support their family. A year ago Pauline began to experience pain in her lower abdomen and back as well as irregular and heavy bleeding. She was diagnosed with uterine fibroids. Physicians at our hospital partner, African Mission Healthcare Foundation, have recommended that Pauline have a total abdominal hysterectomy (TAH) to keep the fibroids from growing so that she will not continue to lose blood. "Pauline is very social and leads many women groups in her area," our medical partner tells us."Unfortunately, this condition is making her avoid social gatherings." Together, we can raise the $790 to pay for Pauline's TAH procedure. "I am confident that the donors will come to my aid so that I can be able to regain my life," says Pauline. 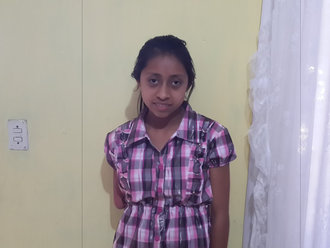 Maria is a lovely 13-year-old girl living in Guatemala, who was born without a right arm from just above the elbow downward. Maria enjoys going to school and learning everyday, however, she often feels distressed when her classmates fail to be compassionate about her condition. Our medical partner, Wuqu’ Kawoq, writes, “It also limits her independence with simple daily tasks. Given her complex anatomy and lack of an elbow, she’ll need a custom molded and fitted prosthetic.” For $1,255 Maria will receive a molded prosthetic arm that would greatly improve her self-esteem and allow her to be more independent. Let’s give Maria the chance to enjoy her adolescence! 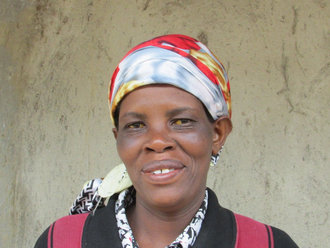 This is Naomi, a 43-year-old Kenyan woman. Naomi is married with six children. Three of her children have finished high school and work as casual laborers on people's farms in the area, while the other three are still in school. Naomi and her husband work as casual laborers doing whatever job is available to be able to make ends meet. Naomi has chronic cholecystitis (inflammation of the gallbladder). As a result, she lives with constant vomiting, heart burn, severe back pain, and jaundice. For $1200, we can fund a laparoscopic cholecystectomy for Naomi. This will pay for part of the treatment, medication and hospitalization that Naomi will receive. We expect that after the surgery, Naomi will be able to continue working and taking care of her family. Let's fund this procedure and help Naomi live without the pain of an inflamed gallbladder! 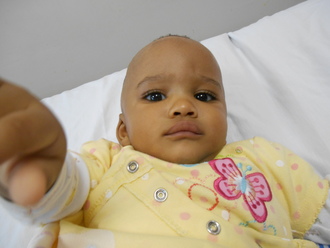 Iyanna is a happy one-year-old who likes to be around people. She is her parents' first child. Parts of Iyanna’s intestinal tract do not function. She has had a colostomy, an operation that provides an alternative channel for feces to leave her body. Iyanna has had complications with her colostomy, with bleeding and the risk of infection. She needs a further operation to close her colostomy and make her intestines work normally. Iyanna’s parents both work hard in the village market in Tanzania. Her mother says, “It is a blessing to have a child. Our prayer is to see our baby able to use the bathroom like any other normal person and be able to go to school and become independent”. The surgery Iyanna needs costs $1200, and it will give Iyanna a healthy, normal childhood, free from medical complications. Let's give Iyanna, and her loving parents, that gift. 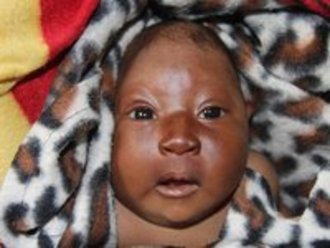 Meet Petcy, a-one-year-old from Kenya. Petcy is the youngest of four children. Her parents lease a piece of land that they farm to support the family. They live in a rented house in a town nearby the farm. Petcy lives with spina bifida, a condition in which a portion of the spinal cord protrudes outside the back. Petcy needs surgery on her back to remedy this, otherwise she is in danger of developing an infection and various back problems like tethered cord, kyphosis and scoliosis. Petcy’s mother is worried but optimistic. She says, "The birth of my daughter was a happy moment for me but when I was told that she would need surgery on her back, I felt as though my happiness was being taken away because we cannot pay for her treatment. I pray that Petcy gets treated and recovers so that she can have a good future.” For $980, surgery will be performed that will answer that prayer! The surgery will allow Petcy to live a normal life. Let's make it happen! 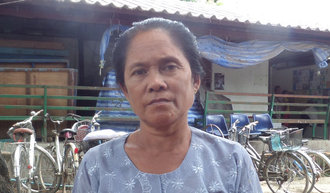 Meet Daw Tin! Daw Tin is a 54-year-old mother of five and lives in Burma with her family. Daw Tin and her husband work on their family farm with the help of their sons. Daw Tin has had a prolapsed uterus for the last eight years. Some of her symptoms, including pain in her uterus and extreme dizziness, keep her from being able to eat and sleep well. Daw Tin is also unable to carry out her daily chores or help on the family farm, which impacts the family financially. By surgically removing her uterus, doctors will be able to provide Daw Tin with the opportunity to be free from the daily pain which she has experienced for so long. Help us raise $1150 to keep Daw Tin healthy so she can be free of stress and join her husband in work on the farm.