Daniel has funded healthcare for 34 patients in 13 countries. 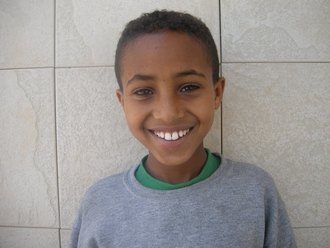 Yonas is a child from Ethiopia. He is an outstanding student whose good grades earned him a sponsorship to study in an international school. He enjoys studying language and playing volleyball with his friends. His mother is a single mother who makes injera (flat Ethiopian bread) for a living. Yonas was born with hypospadias, a congenital abnormality that causes urinary dysfunction. Without treatment, he will continue to experience uncomfortable symptoms and will be at risk of infertility. Fortunately, Yonas is scheduled to undergo corrective surgery on January 23. Our medical partner, African Mission Healthcare Foundation, is requesting $1,231 to cover the total cost of his procedure and care. His mother says, “It is our hope to get the surgery and to find our child in a better physical status.” 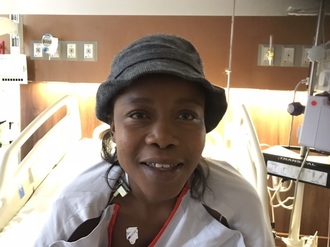 Esther is a young woman from Haiti. She lives with her younger sister in Port-au-Prince. She was previously a teacher but has had to stop working due to her heart condition. Esther has a cardiac condition called severe mitral regurgitation. One of the four valves in her heart has become severely damaged from rheumatic fever, and can no longer adequately circulate blood to the rest of her body. Esther will fly to the United States to receive treatment. On December 12, she will undergo cardiac surgery, during which surgeons will replace her damaged valve with an artificial implant. Another organization, The Heart Hospital Baylor Plano, is contributing $65,000 to pay for surgery. Esther's family also needs help to fund the costs of surgery prep. The $1,500 bill covers labs, medicines, and checkup and followup appointments. It also supports passport obtainment and the social workers from our medical partner, Haiti Cardiac Alliance, who will accompany Esther's family overseas. She says, "I would like to say thank you to everyone who is helping me to travel for this surgery!" 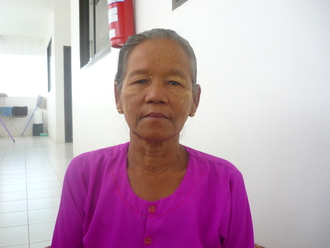 Dah is a 63-year-old farmer from Burma. She owns a small farm with her husband and has eight children. Her oldest son and her husband work with her on the farm, while her youngest son is working in Bangkok. The rest of her other six children are married. Three years ago, Dah began experiencing discomfort when she sat or walked. Her appetite diminished, and she became very dizzy when standing or moving around quickly. She has been diagnosed with a uterine prolapse. She has been advised to undergo a total abdominal hysterectomy, the surgical removal of her uterus and cervix. If left untreated, Dah's symptoms will continue to worsen and put her at risk for further health complications in the future. Fortunately, Dah is scheduled to undergo her hysterectomy on November 23. Our medical partner, Burma Children Medical Fund, is requesting $1,500 to cover the total cost of her procedure and care. After surgery, Dah will return to her farm and will no longer experience discomfort. Dah says, “Now that the time is close to start harvesting the rice, I worry that I won’t be able to help my son and my husband. After I receive surgery and recover, I hope to return to my farm to help raise the animals." 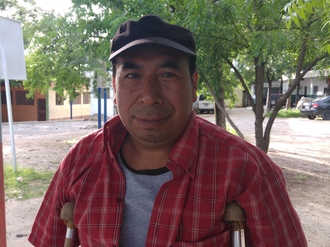 Cesar is a 50-year-old married father of four who lives in Guatemala's rural highlands. His and his wife's joint sales of small rings provides a source of family income. For years, Cesar worked as an agricultural laborer in the local countryside. Unfortunately, Cesar suffered an accident that resulted in the need for an amputation of his leg at the hip. For many years now, Cesar has struggled to walk, go to work, and complete daily tasks. Our medical partner, Wuqu' Kawoq, is requesting $1,166 to cover the cost of a prosthetic leg for Cesar. The start of Cesar's fitting and molding sessions is scheduled for July 7. Receiving this prosthesis will positively impact Cesar's life, hopefully allowing him to walk more easily, comfortably, and independently. “I hope that by recovering my leg I can do something with my life. With our business we only earn pennies. Hopefully with the new leg I will be able to do something new, something unique,” expresses Cesar. 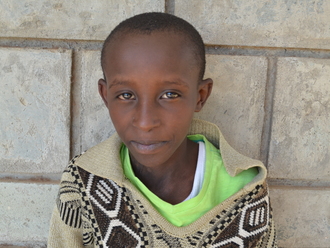 “My wish is to be a driver when I am older,” shares Michael, who lives in Kenya. At 13, Michael is an eloquent young man. He and his three other siblings live with neighbors in their village. Although his foster family can take care of his basic needs, they do not have the extra money to help treat an ongoing injury Michael has experienced. In 2009, Michael and his sister were preparing food when he was accidentally burned by cooking oil on his hand and neck. After several hospital visits, he received a skin graft in 2011. Michael mostly healed, but contractures—abnormally tight, tough sections of tissue—formed on his neck where the burn had been. As Michael continued to grow, the contractures stretched his neck into an abnormal position. Unless he is treated, this twisting will only continue to worsen. Fortunately, though, we can help Michael. For $1,176, we can sponsor the surgical procedure that will release his contractures, allowing his neck to return to its normal position. This sum will also cover the lab tests, medications, and nine-day hospital stay that will accompany his operation on January 17, 2018. Michael has already faced many challenges in his short life. Let’s help make sure chronic medical disability doesn’t become another one. 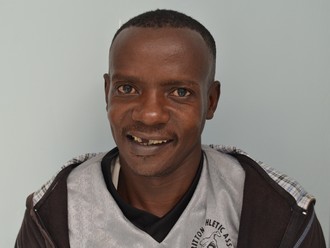 Victor is a 36-year-old man from Kenya who used to work as a fruit trader. Victor lives with his wife in a settlement in Nairobi, and together they have four children who, with the help of their grandparents, are all enrolled in school. Several years ago, Victor suffered a severe road accident. He was admitted to the hospital for three months and underwent two surgeries. Victor was left in crutches, unable to work. Last year, Victor underwent a first stage bone transport, a technique that allows for the regeneration of bony tissue. Surgeons have now recommended that Victor undergo a second stage bone transport in order to enhance his future mobility and prevent further infection. Our medical partner, African Mission Healthcare Foundation, is requesting $1,500 to cover the cost of Victor's operation. The procedure is scheduled to take place on June 29 and, once completed, should allow Victor to walk with ease and live comfortably with his family again. “I would like to get well to continue providing for my family and educate my children," says Victor. 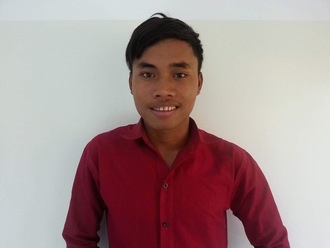 Sakum is a 20-year-old construction worker from Cambodia. He has one younger sister and three younger brothers. In his free time, Sakum likes to play games, play football, watch TV, and do housework. About a month ago, Sakum developed a cholesteatoma, an abnormal skin growth in the middle ear behind the eardrum. He went to a local hospital for treatment, but his symptoms did not improve. He started to experience hearing loss, tinnitus (a ringing or buzzing in the ear), and headaches. He worried that his ear problems would become more and more serious. Thus, he visited our medical partner, Children's Surgical Centre (CSC), for treatment. ENT surgeons at CSC will perform a mastoidectomy, a surgical procedure that will remove the diseased cells of the cholesteatoma. The treatment will allow Sakum's hearing to gradually improve. The surgery is scheduled for March 23, and CSC is requesting $842 to fund the procedure. 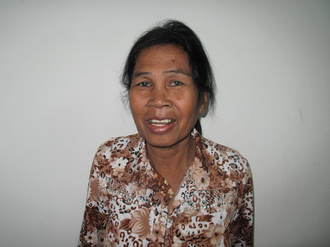 Lorn is a 62-year-old woman from Cambodia. She has two brothers and three sisters. In her free time, she enjoys visiting the pagoda and listening to monks pray. Four months ago, she developed a cataract in each eye. This has caused her great difficulty in seeing things clearly, recognizing faces, and doing any type of work. She traveled three hours with her sister to reach our medical partner, Children's Surgical Centre, for her treatment. She is scheduled to receive surgery on May 26 to improve her condition. The $292 covers medication, hospital supplies, and physician costs for the treatment. The surgery involves placing a lens implant in each eye, allowing her to see clearly and become independent once again. 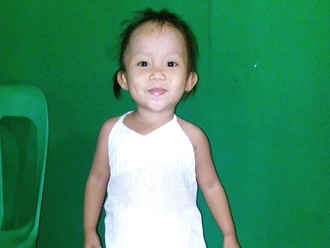 Charlin is a two-year-old girl from Philippines. She lives with her parents, who both work as farmers. Charlin was diagnosed with moderately acute malnutrition, a condition in which she does not receive the proper nutrients needed to sustain a healthy, growing body. Beginning on February 22, Charlin will receive at-home treatment from our medical partner, International Care Ministries (ICM). ICM’s home-based feeding program will provide Charlin with nutrient-enriched food packs to ensure she regains normal weight and achieves optimum physical and mental development. To help sustain Charlin's health, ICM's professional staff will educate her mother on proper nutrition, sanitation, hygiene, and organic vegetable gardening. Our medical partner is asking for $184 in funds to cover Charlin's treatment. "I hope my daughter will grow up healthy...and will recover from malnutrition," says Charlin's mother. 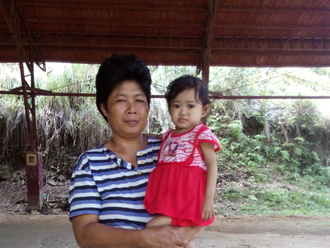 Rogelyn is a two-year-old baby girl from Philippines. She lives with her family in a bamboo house near a river. The family supports itself selling vegetables and root crops at a small store. Rogelyn loves to play with her cousins. Recently, Rogelyn was diagnosed with malnutrition. To treat her condition, Rogelyn will begin receiving at-home treatment from our medial partner, International Care Ministries (ICM), on February 21. ICM’s home-based feeding program will provide Rogelyn with nutrient-enriched food packs to ensure she gets the additional food she needs to regain normal weight and achieve optimum physical and mental development. Additionally, ICM's professional staff will educate her mother on proper nutrition, sanitation, hygiene, and organic vegetable gardening. ICM is asking for $268 to fund this treatment. "I would like Rogelyn to recover," says Rogelyn's mother. "Then she can go to school and finish her studies." 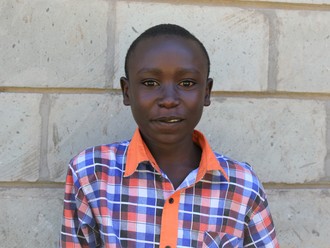 Alvin is a 14-year-old boy from Kenya. “I would like to be a civil engineer when I grow up,” he says. Alvin lives with his sibling and grandmother in central Kenya. Three weeks ago, Alvin began complaining of pain in his groin. At points, it was so intense that he could not walk. His uncle rushed him to the nearest pharmacy and purchased pain relievers. This, however, did not calm the situation. With time, the pain got worse, and a swelling developed. Visiting a nearby hospital, Alvin was diagnosed an abnormal condition in a sensitive area. Surgery was recommended, but Alvin and his family were unable to meet the cost. A family friend advised them to visit our medical partner's care center, BethanyKids Kijabe Hospital, to see if they might receive help. Now, Alvin is scheduled to undergo corrective surgery on March 9. Our medical partner, African Mission Healthcare Foundation, is requesting $542 to cover the cost of the operation. 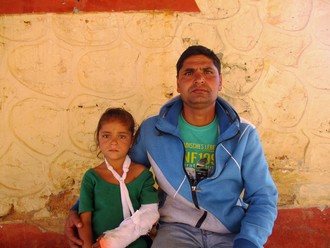 Ganga is a five-year-old girl from Nepal. Her father works in India, and her mother looks after the children, while tending to the farm and grazing cattle. Ganga was playing with her brother when she fell and injured her left hand. Her hand became swollen and painful, making it difficult for her to bathe and dress. Ganga's family traveled three hours to reach our medical partner’s care center, Bayalpata Hospital, for treatment. On February 15, Ganga will undergo a fracture repair surgery on her left hand. Our medical partner, Possible, is requesting $195 to fund the procedure.