Max has funded healthcare for 1 patient in 1 country. 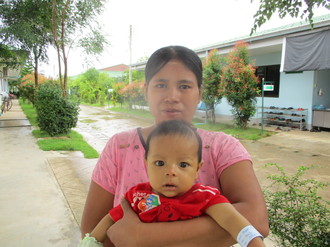 Myat is a two-month-old boy who lives with his family in Hpa-An Town, Karen State, Burma. His father passed away when his mother was two months pregnant with him. Myat’s mother is a homemaker and she takes care of him at home. All of his sister and brothers are students. Myat’s grandfather drives a tricycle taxi. On 6 June 2019, Myat was born without any complications at HGH. Since he was born, his mother noticed that he has been passing white coloured stools, but she did not do anything about it because she thought it was normal. When he was just over a month old, his mother noticed that Myat’s navel was bigger than normal. His mother then took him to HGH. The doctor examined his navel and told his mother not to worry too much and he also told her come back if it becomes bigger. A few days later, Myat’s mother noticed that his navel has become bigger and his mother took him to the hospital again. The doctor again took a look at Myat’s navel and advised his mother to take him to a hospital in Yangon for treatment. However, Myat’s mother did not have money to go to Yangon. On 6 September 2019 Myat received an X-ray at Mae Sot Hospital (MSH) and was given a diagnosis of a bulging navel and biliary atresia, a childhood disease of the liver in which one or more bile ducts are abnormally narrow, blocked, or absent. Currently, Myat still passes white coloured stools. He also has a bulging navel which never goes away. His mother is very much worried for him, especially that she just learned about his liver disease. Myat’s mother said, “I would like him to be like other children. I feel bad for him but at the same time happy that an organization Burma Children Medical Fund will help him for his treatment.”