Eric has funded healthcare for 26 patients in 10 countries. 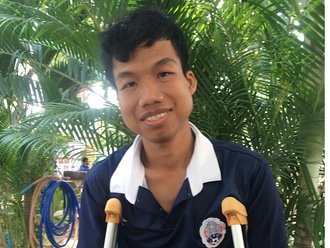 Sochan is a computational instructor from Cambodia. He is the eldest of three siblings. He enjoys reading and playing football with is friends in his free time. Two weeks ago, he was in a motor vehicle accident which caused an open wound on his foot. He cannot walk and has pain from his chronic open wound. When Sochan learned about our medical partner, Children's Surgical Centre, he traveled for two and a half hours seeking treatment. On March 13, surgeons at CSC will perform supramalleolar skin flap (ankle) surgery to to help him regain function in his foot and to stand and walk again. Now, he needs help to fund this $606 procedure. He says, "I hope I can walk again after the operation and not be in pain all the time. I look forward to going home and spending time with my friends." 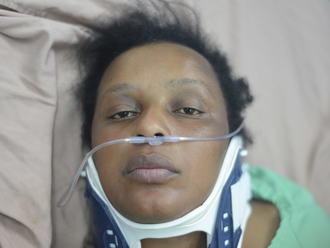 Ann is a bar attendant from Kenya. She is a mother of four children. In early February, Ann was riding as a passenger on a motorcycle when they were hit from behind by a hit-and-run vehicle. She was rushed to the hospital and was diagnosed with femur fracture and cervical spine fracture. She is not able to sit, stand, or walk and is in a lot of pain. Fortunately, surgeons at our medical partner can help. On February 16, Ann will undergo a fracture repair procedure, called an open reduction and internal fixation. The procedure will help her walk easily again. Now, our medical partner, African Mission Healthcare Foundation, is requesting $1,451 to fund this procedure. Ann says, “I wish to be treated and leave the hospital when am much better. I still need to provide for my children." 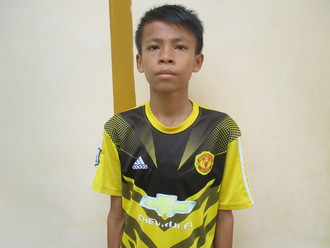 Ye is a 15-year-old boy from Burma. He lives with his younger sister, brother, and mother in Yangon Division. Ye was diagnosed with a heart condition that involves a malformation of the mitral valve, the valve between the left atrium and left ventricle. This valve controls the flow of blood, but certain conditions may cause blood to flow backward or the valve to narrow. Currently, he experiences chest pain and fatigue. Our medical partner, Burma Children Medical Fund, is requesting $1,500 to fund a mitral valve replacement for Ye. The treatment is scheduled to take place on January 17 and, once completed, will hopefully allow him to live more comfortably. “If I feel better after surgery, I will go back to school to continue my education. I want to become an educated man one day," says Ye. 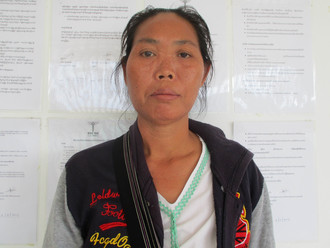 "I can eat soft food now,” shares Naw Goe, a 46-year-old woman from Burma. “but sometimes when I try to eat a little bit of hard food, I feel uncomfortable.” In November of 2016, Naw Goe was returning home from working in the fields on a small tractor with four other people. A motorbike crashed into their vehicle, directly hitting Naw Goe. Naw Goe woke up across the border from Burma, in a Thai hospital. Naw Goe's lower leg and jaw were broken. Naw Goe received surgery for her leg, jaw, nose, and face. These operations included the insertion of a rod into her face. However, on her most recent follow-up appointment, Naw Goe’s doctor told her that she now needs to have the rod removed from her jaw so that she can eat normally. Naw Goe and her husband work as subsistence farmers, and in the wake of the many surgeries she has already undergone, they do not have any money to put towards this newest operation. The couple has already had to stop sending their three children to school because they cannot afford the fees. With your help, though, Naw Goe can still receive the procedure she needs. $1,500 will cover the costs of her upcoming surgery on January 19, as well as her lab tests, medications, and seven-day hospital stay. The past year has been an ordeal for Naw Goe. Let’s do our part to help her find stability and physical comfort once more. 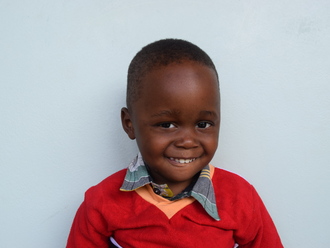 Icram is a three-year-old little boy from Tanzania. He loves playing football and has not started school yet. Icram was diagnosed with bilateral genu varus. This has made it difficult for him to learn to walk. This condition is typically caused by an excessive accumulation of fluoride in the bones, which often stems from contaminated drinking water. As a result, Icram will not be able to play or walk to school in the future. Our medical partner, African Mission Healthcare, is requesting $940 to fund corrective surgery for Icram. The procedure is scheduled to take place on November 17. Treatment will hopefully restore Icram's mobility, allow him to participate in a variety of activities, and greatly decrease his risk of future complications. Icram’s mother says, “I am hopeful that my son will be well. Thank you all for helping him get better.” 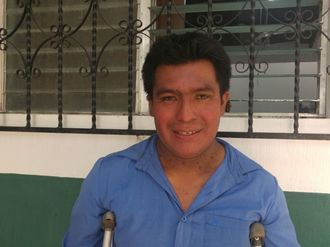 Basilio is a 39-year-old father from Guatemala. He lives with his wife and six children, aged 3 to 20 years old. One year ago, Basilio’s foot was amputated in an emergency surgery when doctors found a hemangioma that needed to be removed. Before his amputation, Basilio worked as a weaver. Since then, however, he has been unable to work. On July 19, Basilio will be fitted for a custom prosthetic foot at our medical partner's care center, Hospital Regional de Zacapa. Our medical partner, Wuqu’ Kawoq, is asking for $1,166 to cover the cost of his prosthetic. Receiving this treatment will allow Basilio to find a new job. "I hope to walk again without complications and work normally so that I can support my family" says Basilio. "Thank you very much for the opportunity that you have given me to obtain a prosthetic.” 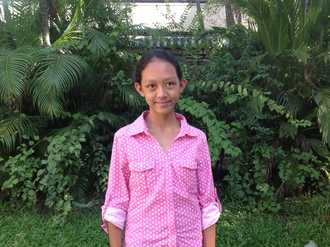 Kunthea is a 14-year-old student from Cambodia. When Kunthea was a child, she was diagnosed with scoliosis, a sideways curvature of the spine. The curve in her back has worsened and causes Kunthea discomfort. Seeking treatment, Kunthea visited our medical partner’s care center, Kien Khleang National Rehabilitation Centre, where she was told she would undergo a procedure to treat her condition. The surgery with help correct the position of the bones, and prevent further curving of the spine. Our medical partner, Children's Surgical Centre, is asking for $1,500 to cover the cost of Kunthea's surgery on September 5. Kunthea's mother says, "I want my daughter to be healthy and stay in school". 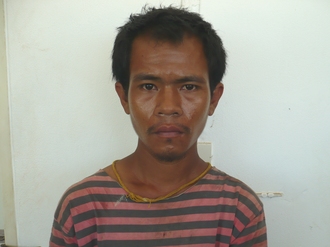 Ah is a 23-year-old man who lives in Mae Sot, Thailand. He was born in Burma, but he decided to move three years ago since he no longer had any relatives left there. In Mae Sot, he lived with his grandmother until she passed away. Now Ah lives alone and works as a construction worker. On June 5, Ah was working on the roof of a building at a construction site when he slipped and fell, sustaining a severe open fracture to his left forearm. His was immediately brought to our medical partner's care center, Mae Tao Clinic (MTC), where he received treatment to reduce the bleeding. After initial treatment, Ah was referred to our medical partner, Burma Children Medical Fund (BCMF), for further treatment. Ah is in a lot of pain and unable to work. He says, "I am very worried and stressed now because I have no one to look after me." Thankfully, surgeons will be able to perform an internal fixation procedure on Ah's forearm, resetting the bone and giving the injury a chance to heal properly. BCMF requests $1,500 to cover the cost of Ah's surgery and medical care. 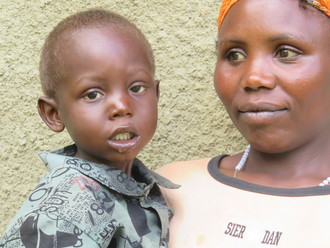 Alex is a two-year-old boy from Karambi, Uganda. Alex has been diagnosed with severe malnutrition. Alex is emaciated and has been having diarrhea for the last two weeks and malnutrition for the last two months. Alex's mother took him to a nearby health facility, where he was given treatment and deworming tablets. Alex’s parents are small farmers and own a very small piece of land, on which they grow food. To earn additional income, Annette, Alex's mother, works as a farm laborer. Patrick, Alex's father, does lumber jobs. Unfortunately, they do not have enough money saved to pay for Alex’s treatment. Alex is the third child in a family of three children. When he is feeling well, he likes playing with his siblings after they come back from school. His mother is hoping that Alex will be able to attend school once he is fully recovered. Annette says, “Words cannot express how grateful I am for the Watsi program and the support from the donors towards the care of my son. May God richly bless the donors.” On May 14, Alex will undergo pediatric malnutrition treatment. Our medical partner, The Kellermann Foundation, is requesting $316 to fund this treatment. The requested $316 pays for medication, materials, and ten nights of hospital stay. 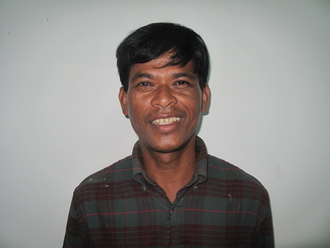 Chamroen is a 50-year-old corn and potato farmer from Cambodia who is married with two sons, three daughters, and two grandsons. He likes to listen to the news on the radio and watch boxing on TV in his free time. Chamroen developed a traumatic cataract in each eye after being hit by bamboo about three days ago. He has blurred vision, burning, pain, tearing, cloudy lenses, and photophobia (extreme sensitivity to light). It is difficult for him to see things clearly, do any type of work, and go places on his own. On April 20, eye surgeons at our medical partner Children's Surgical Centre (CSC), will remove the cataract from each eye to allow Chamroen to see clearly again. CSC is requesting $292 for Chamroen's cataract removal. 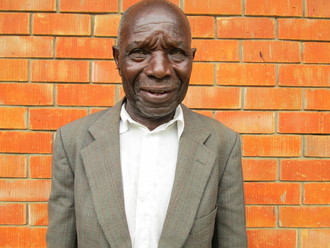 Six months ago, Kafabusa developed a swelling in a sensitive area. He sought aid from a government hospital, where he was diagnosed with an inguinal hernia, which occurs when intestinal tissue pushes through a weak spot in the groin muscle. He was admitted to the ward, and for six days Kafabusa sat and waited. He never received medical attention, so after his sixth day, he requested to be discharged. A neighbor suggested Kafabusa try his luck with our medical partner's care center. The doctors at the hospital confirmed the diagnosis and insisted he get surgery to repair his hernia. His surgery is scheduled for April 26. The pain makes it difficult for Kafabusa to walk or lift heavy items. If he does not receive the treatment he requires, Kafabusa runs the risk of strangulating his hernia, cutting off the blood supply to his entrapped intestine. Kafabusa is 74 years old, married, and a father to one child. They live in Uganda. Kafabusa and his wife are farmers. They cultivate and sell beans and cassava. From their crop, they are able to cover costs for basic needs. Kafabusa hopes for healthier days after his surgery, so he may resume farming and providing for himself and his wife. AMHF is asking for $249 to cover the costs of Kafabusa's surgery. Your donation will help pay for the surgeons' fees, surgical supplies, medication, laboratory tests, and three nights of hospital stay. 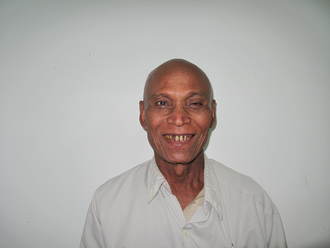 Tang is a 69-year-old archbishop who is married and has two sons, two daughters, and five grandchildren. He likes to read books, join ceremonies, and listen to monks praying in his free time. Three years ago, Tang developed a cataract in each eye, causing him blurred vision. He has difficultly seeing things clearly, and he worries about his vision in the future. When Tang learned about our medical partner, Children’s Surgical Centre, he traveled for three hours to seek treatment. On February 20, doctors will perform a phacoemulsification cataract surgery and an intraocular lens implant in each eye. After recovery, Tang will be able to see clearly again. Now, he needs help to fund this $292 procedure.