Prakhar has funded healthcare for 1 patient in 1 country. 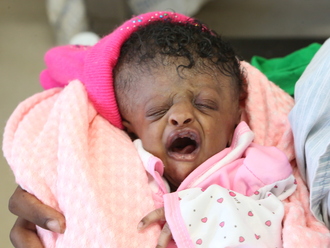 In late January, the Muinde family from Kenya was blessed with their firstborn child, a daughter they named Emmaculate. Emmaculate's mother works in a mobile money shop and Emmaculate's father has a small electronics shop. They live in a small rented house in Nakuru, and are able to use their income to cover most of their family's basic needs. They learned that Emmaculate was born with a rare form of craniosynostosis, which meant that her eyes were not fully formed and her pupil was not visible in both of her eyes. A few days after her birth, Emmaculate was reviewed at her local clinic, and the doctor referred Emmaculate to a nearby facility for further examination. Ultimately, Emmaculate was seen by the doctors at our Medical Partner Care Center BethanyKids Kijabe Hospital (BKKH). On March 1st, Emmaculate will undergo a craniotomy in order to release the pressure in her brain. However, Emmaculate’s parents are not able to cover the amount needed for her surgery. Emmaculate’s father says, “When I was told about my child’s condition and the treatment required, my heart sank as we could not afford any of this treatment. As a family, we are requesting financial help.”