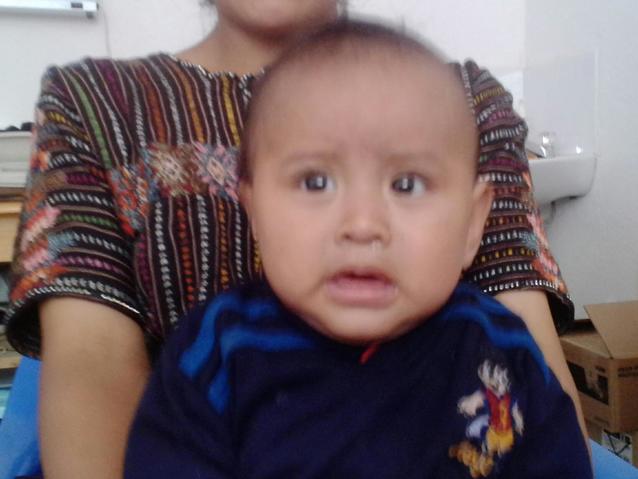 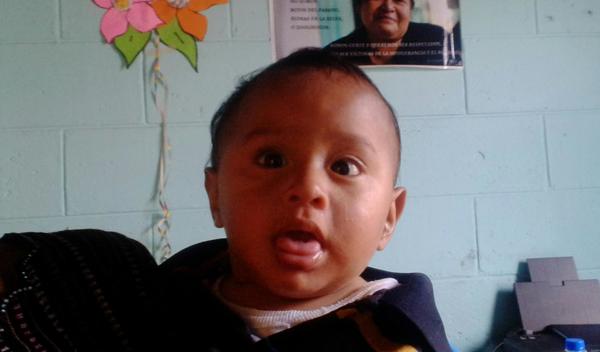 Yonathan has been growing bigger and taller since he began treatment for malnutrition. Since his mother was very worried about his continued weight loss, we provided him with a small amount of food supplements to stabilize his condition until he our nutritionist could create a custom treatment plan to ensure he would grow and recover. His mother is thrilled with how her son is gaining weight and eating well, and is excited to continue learning about affordable changes she can make to her son’s diet to help him be healthy, and prevent future malnutrition.

“He is gaining weight and height and eating well,” Yonathan’s mother shared. “I am so thankful for the advice and the classes, now my son plays better and does not get sick much.”

Yonathan has been growing bigger and taller since he began treatment for malnutrition. Since his mother was very worried about his continued...

Nine-month-old Yonathan has been losing weight and not growing taller for the past couple of months. This is because he is malnourished, and is not getting the calories, protein, and nutrients he needs to grow. His mother is worried that he is not growing, and has noticed that his appetite has decreased. His energy level has been lower than normal, and he hasn’t wanted to play as much as he used to. In the long term, he could face risks such as decreased IQ, chronic diseases, and subsequent low earning potential if he does not receive treatment.

Yonathan lives with his family in a one-room adobe house in Guatemala. If this story sounds familiar it is because Yonathan’s twin brother, Kenneth, is also a Watsi patient dealing with malnutrition. His father works as a day laborer, harvesting crops such as corn, beans, and squash. His mother works at home taking care of Yonathan and his brother. Together they live on about two dollars per day, making it impossible to afford fruits, vegetables, and eggs for Yonathan and Kenneth.

However, for $512 treatment will be possible for Yonathan. Growth monitoring, micronutrients and food supplementation will help Yonathan recover from malnutrition–saving his life now and putting him on track to live a better life in the future. He will gain weight and grow taller to catch up with other children his age. His immune system will grow stronger with the increased caloric intake, preventing him from having any life-threatening situations with diarrhea and fevers. This will further increase his appetite and help him use the extra calories to develop mentally instead of those calories being wasted on getting over frequent illnesses.

His parents will receive the support they need to feel empowered to give Yonathan the diet he needs to grow and develop healthily. Intervention now will prevent the future devastating effects of malnutrition, and give Yonathan the chance to live a healthy and productive life, finish school, get a good job, and escape the cycle of malnutrition and poverty that made him sick in the first place.

“I am worried because my son is not eating like he should,” explains Yonathan’s mother. “I am interested to know what I have to give him to improve his diet.”

Nine-month-old Yonathan has been losing weight and not growing taller for the past couple of months. This is because he is malnourished, and...

Yonathan's case was submitted by Jessica Hawkins at Wuqu’ Kawoq in Guatemala.

Children generally face stunted physical growth, delayed mental and motor development, low appetite, and frequent illness. Malnourished children have weakened immune systems that put them at risk of diarrhea, fevers, and respiratory illnesses. This treatment treats growth failure in small children usually under 2 years of age. The most common form of growth failure in children in Guatemala is called stunting. This is a form of malnutrition where weight is relatively normal but height is severely reduced.

Stunting has major effects on the developing brain. Stunted children have low IQ and they don’t make major developmental milestones. These effects persist into adulthood, where they impact schooling and economic potential. Furthermore, stunting contributes to the development of serious adult illness like diabetes, heart disease, and obesity.

Children enrolled in our recuperative nutrition program receive about 1-4 months of intensive intervention, depending on the severity of the case. All of this care is delivered in the home in a personalized fashion. Most require a basic laboratory evaluation to look for thyroid disease, anemia, and intestinal infections. Acute infections are rapidly treated with antibiotics. Then a specialized case manager and nutritionist make weekly or every other week educational and health monitoring visits to the home. An assessment of food insecurity is conducted using standardized instruments and food is often provided to help bolster acute recovery. Micronutrient supplementation is provided.

This treatment saves brains. Appetite and growth and developmental milestones recover, and height begins to rise once again. The immediate outcome is improved overall child health, including reduced vulnerability to severe infections. The long term outlook is improved cognitive potential, school completion, and economic prospects. Nearly 100% of children will experience improve appetite, energy, and development. At least 75% of children will have noticeable improvement in growth parameters. The effects of the intervention extend to other children in the home; since the approach is highly educational, parents learn how to care for other children and prevent this from occurring subsequently.

This condition is treatable, and no risks for treatment exists.

Treatment for malnutrition is incredibly inaccessible in Guatemala. Populations are rural and don’t have access to intensive nutritional intervention and education. Public sector approaches are too low intensity to make a difference for these children.

There are no real alternatives to our program. Many organizations and governmental entities provide basic preventative care, but once a child is already malnourished these approaches are no longer effective. Most children fail prevention and therefore need our help. 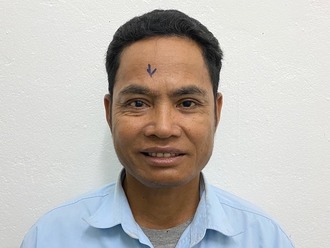 Huot is a 53-year-old construction worker from Cambodia. He has five children, two grandchildren, and enjoys watching television and listening to the monks pray on the radio. Three months ago, Huot developed a cataract in his right eye, causing him blurry vision and photophobia. He has difficulty seeing things clearly, recognizing faces, and going anywhere outside. When Huot learned about our medical partner, Children's Surgical Centre, he traveled for three and a half hours seeking treatment. Doctors will perform a phacoemulsification cataract surgery and an intraocular lens implant in his right eye. After recovery, he will be able to see clearly. Now, he needs help to fund this $211 procedure. "I hope that I will be able to see clearly again and will be able to return to my work," shared Huot. 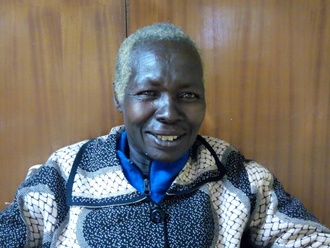 Siphilina is a 68-year-old talkative grandmother. On 25th of October, 2019, Siphilina fell, sustaining severe left femoral neck fracture. She was taken to the nearest health facility but could not get treatment due to the severity of the condition. She spent some days at home as she was unable to afford medical care. She was in great pain, could not walk and had difficulties sitting or lying in bed. Fortunately, Siphilina went to Kapsowar hospital whereupon diagnosis, she had an ORIF surgery recommended. The surgery will relieve her of the pain, reduce the chances of ambulation problems and further closed fracture complications. Siphilina, a humble millet farmer lives with her daughter and three grandchildren in the village. She lost her husband years ago. Her only source of income is from subsistence farming which has very low-income yields. This limits her ability to raise the required hospital fee for the surgery. Siphilina appeals for help to be able to meet the cost of surgery.  Fortunately, surgeons at our medical partner can help. On October 30th, Siphilina will undergo a fracture repair procedure, called an open reduction and internal fixation. The surgery will reduce the pain, fix the fracture reducing chances of further complications on her left leg. Now, our medical partner, African Mission Healthcare Foundation, is requesting $968 to fund this procedure. Siphilina says, “I want to be able to walk sit and even feed by myself like other people.” 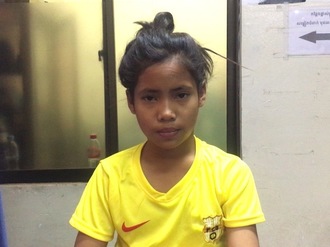 Sokneang is a sixth-grade student from Cambodia. She has two brothers and one sister, and enjoys reading books and watching television after school. When she was little, Sokneang had an ear infection. This infection caused the tympanic membrane, or the ear drum, in her left ear to perforate. For this reason, Sokneang experiences hearing loss, ear discharge, infection, and tinnitus. She has difficulty concentrating in school and cannot hear and communicate well with others. Sokneang traveled to our medical partner's care center to receive treatment. On January 16th, she will undergo a myringoplasty procedure in her left ear. During this procedure, surgeons will close the perforation. Our medical partner, Children's Surgical Centre, is requesting $464 to fund this procedure. This covers medications, supplies, and inpatient care. "I hope that my daughter's ear will recover from her surgery and I will no longer have to worry about her condition," her mother said.

Huot is a 53-year-old construction worker from Cambodia. He has five children, two grandchildren, and enjoys watching television and listening to the monks pray on the radio. Three months ago, Huot developed a cataract in his right eye, causing him blurry vision and photophobia. He has difficulty seeing things clearly, recognizing faces, and going anywhere outside. When Huot learned about our medical partner, Children's Surgical Centre, he traveled for three and a half hours seeking treatment. Doctors will perform a phacoemulsification cataract surgery and an intraocular lens implant in his right eye. After recovery, he will be able to see clearly. Now, he needs help to fund this $211 procedure. "I hope that I will be able to see clearly again and will be able to return to my work," shared Huot.