Kerri has funded healthcare for 1 patient in 1 country. 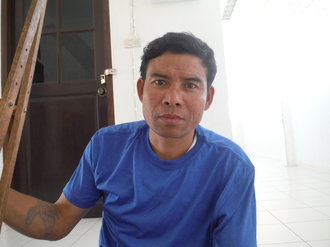 Maung Chit is 43 years old and the father of a large family. He lives with his family in Burma. He works very hard as a day laborer, employed by several large farms. In April 2016, Maung Chit experienced an accident while unloading timber from a wagon. A portion of the load fell on top of him and broke his right leg above the ankle. In June 2016, he made the four-hour journey to a clinic, where an X-ray of his leg was taken. He was referred to our medical partner, Burma Children Medical Fund (BCMF), to examine the large bulge on his leg, which was preventing him from walking. In December 2016, Maung Chit underwent an internal and external fixation surgery. Maung Chit now needs another surgery to remove the rod placed during his first operation. Our medical partner, BCMF, is requesting $1,500 for this procedure.