Tan has funded healthcare for 9 patients in 6 countries. 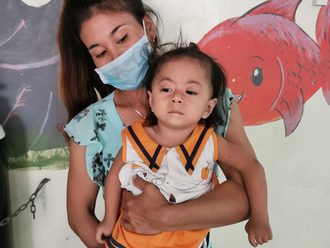 Channy is a fifteen-month-old girl from Cambodia. She is a younger sister in a family with two daughters. She likes playing with her toys and her neighboring friends. As she has developed, she cannot walk and sit. She is unable to bend both knees, has a bilateral dislocated hip, and her thumb has a deformity. Fortunately, surgeons at our medical partner, Children's Surgical Centre, can help. On March 25th, Channy will undergo treatment to repair her dislocated hips, which will cost $465. After surgery, she will better be able to walk and sit, and will someday be a child ready to walk to school. "I hope that my daughter is able to walk and she can go to school in the future,"her mother said. 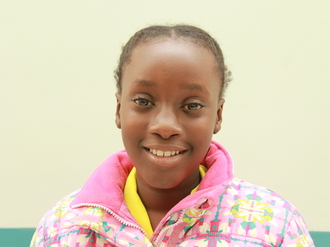 Mary is a smart fifth grade girl from Kenya who aspires to be a pilot. She was diagnosed with adenoids at age one. Her mother would take her daughter to the local hospital and would be given medicine which did not improve her condition. Around July this year, a friend advised that they visit Kijabe Hospital where Mary was diagnosed with adenoids and tonsils and surgery recommended. The surgery, however, was a cost Mary’s parents could not bear. They resigned to fate but hoped someday they would get help. Mary’s parents are both casual cleaners at a company close to where they live with a monthly pay of Kes. 7000 each. The income is barely enough to cater for their family's basic needs. The family of two children lives in a one-room rental house in Nairobi. They hope that their daughter will get the treatment she so needs to improve on her breathing and clogging of her nasal airway. Our medical partner, African Mission Healthcare Foundation, is requesting $779 to fund an adenotonsillectomy for Mary, which is scheduled to take place on December 13th. Surgeons will remove her tonsils and adenoids, hopefully relieving Mary of her symptoms and helping her live more comfortably. “I want to be a pilot in future,” shared Mary. 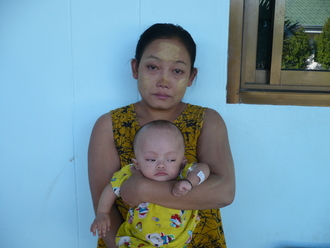 Htwe is a 6-month-old baby boy from Burma. He lives with his parents, two older sisters, and other extended family members. When Htwe was born, he had low glucose level and was admitted at the hospital for 18 days. He was doing fine until a few weeks ago when he started to have infrequent seizures. Doctors want Htwe to undergo a CT scan, a procedure in which x-ray images taken from several angles are combined to produce cross-sectional images of the body. This scan will hopefully help doctors diagnose his condition and formulate an appropriate treatment plan. Our medical partner, Burma Children Medical Fund, is requesting $414 to cover the cost of Htwe's CT scan and care. Htwe's mother said, "As a mother, I’m very sad for my son. I look at him with pity. I’m worried he won’t grow up to become a normal kid like others his age." 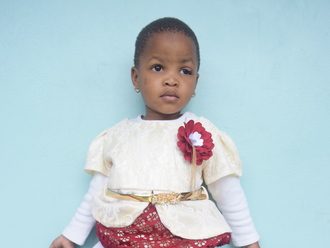 Sabrina is a toddler from Tanzania. Sabrina was diagnosed with acquired bilateral genu varus. Her legs are bowed out. This condition is typically caused by an excessive accumulation of fluoride in the bones, which often stems from contaminated drinking water. Our medical partner, African Mission Healthcare, is requesting $940 to fund corrective surgery for Sabrina. The procedure is scheduled to take place on August 9. Treatment will hopefully restore Sabrina's mobility, allow her to participate in a variety of activities, and greatly decrease her risk of future complications. Sabrina’s mother says, “Being a single mother with no job it’s not been possible to treat my daughter’s leg problem please help." 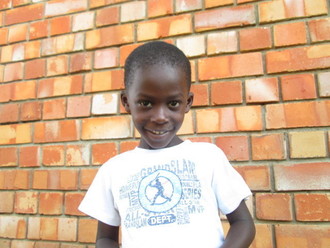 Muhangi is a young student from Uganda. He is the youngest out of three children. He is in pre-school and he wants to become a teacher when he grows up. Muhangi’s parents are farmers. For three years, Muhangi has had a scrotal hernia. This hernia causes him pain and if not treated, it may result in intestinal tissue damage. Fortunately, on September 12, he will undergo hernia repair surgery at our medical partner's care center. Our medical partner, African Mission Healthcare Foundation, is requesting $249 to fund Muhangi's surgery. Once completed, this procedure will hopefully allow him to live more comfortably and confidently. His grandmother says, “After surgery my grandson will have peace of mind and resume with education.” 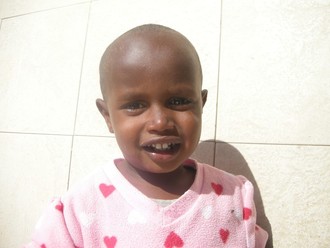 Mohammed is a two-year-old baby from Ethiopia. He loves to play and laugh with people. His father is a traditional farmer, and his mother is a stay-at-home mom. They have eight children. Mohammed was born with an anorectal malformation, a congenital abnormality that leads to a complete or partial intestinal blockage. He needs to undergo a series of procedures to eliminate bowel dysfunction. Mohammed is scheduled to undergo surgery to correct his condition on February 9. Our medical partner, African Mission Healthcare Foundation, is requesting $1,500 to cover the total cost of Mohammed's procedure and care. After his recovery, Mohammed will no longer experience bowel dysfunction or be at risk of developing health complications in the future. Mohammed’s mother says, “My husband is a poor farmer with low income and I’m a house wife and I take care of my kids in the house. Our income is very low even to support our kids. It is our hope to get the surgery and to see our child in a healthy and good position by your support.” 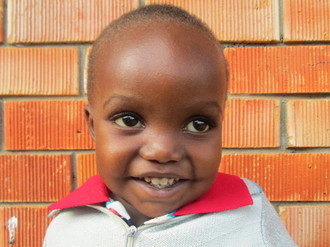 Kene is a two-year-old boy from Uganda, and is an only child. In February of 2017, Kene started developing a swelling in his right scrotum, which grew and became painful over time. His aunt took him to a local clinic where the swelling was diagnosed as a hydrocele, and surgery was recommended to alleviate Kene's pain. Our medical partner, African Mission Healthcare Foundation, is requesting $185 to fund Kene's surgery to correct his condition, which is scheduled for July 5. “After surgery Kene will no longer cry at night, and will grow with good health,” Kene's aunt says. 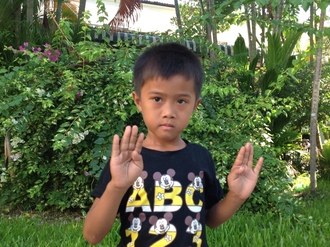 Sainy is a six-year-old boy from Cambodia, currently in first grade. He has one brother, and enjoys staying at home and working on his writing homework and playing with neighboring children. Sainy's left patella (kneecap) dislocated when he was three years old as result of a poorly administered thigh injection. It is difficult for him to walk and he experiences pain when walking long distances. After traveling for three hours with his mom to reach Watsi's medical partner, Children's Surgical Centre (CSC), he will receive the treatment he needs to walk comfortably again. Surgeons at CSC will surgically realign his patella by reconstructing the ligaments that hold the kneecap in place. The surgery and a two-day recovery in the hospital will cost $392. Let's help make it possible! 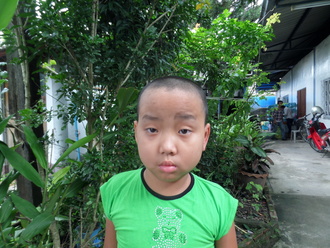 “I am very sad that this has happened to my daughter,” says the mother of Thi, a nine-year-old girl who lives with her mother, sister, and grandmother in Burma. Thi and her mother came to our medical partner, Burma Border Projects (BBP), in search of help for Thi, who was healthy and active until she started experiencing dizziness and vomiting during the spring. “Over the course of several months,” says BBP, “Thi has lost the ability to walk unassisted and to write. Her speech is slow, and she talks with great difficulty. The left side of her face has also been paralyzed.” An MRI confirmed that Thi has a brain tumor, causing swelling in her head and making it difficult for her to control the muscles that move her body. BBP explains, “Thi no longer experiences regular vomiting or dizziness, but her symptoms are quite visible. She is very slow to respond to questions, and her speech is sluggish.” Thi is no longer able to attend school because of her condition. Thi’s mother buys and sells goods to support the family, but her daily earnings are only enough to cover a day’s expenses. In the past, she has had to borrow money from neighbors to pay healthcare costs. Given the family’s financial situation, money to pay for treatment for Thi is unavailable. With $1,485 in finding, Thi can undergo surgery to place a shunt that will relieve the swelling and pressure in her head. BBP shares, “It is hoped that Thi's current symptoms will be alleviated, and that she will be able to return to school following treatment.” Thi’s mother shares that sentiment. “I want her to go back to school and eventually become a preacher,” she says.